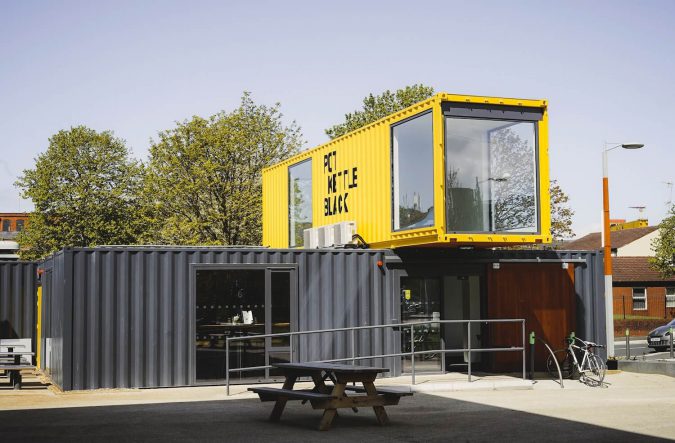 How to convert a sea container. More and more often we hear that it is a good idea to adapt a sea container or a residential container that used to be used on a construction site for purposes such as your own office in a container, a gazebo or even a summer house. Some are even tempted to say that using a container, we can build a year-round house or apartment from a container.

Is converting a container for housing purposes profitable?

Of course, there are also voices that say that the entire investment is not profitable, because the cost of processing a container is only a dozen or so percent lower than building a summer house purchased from a construction company. There is, of course, some truth in this, but it is worth correcting here that all these calculations were made on the basis that the cost of building a summer house was calculated, which was bought from the company (i.e. we buy the project, we buy the house and we buy the workmanship) and it is equated to the adaptation of a container, which is also carried out by companies.

In the case of a container, however, we can basically do all the work ourselves, except for transporting the container from the place of purchase to the place where it will eventually stand and its foundation there. In the case of a summer house, the matter is that even if we wanted to build a house on our own, it is a bit risky for us. If during such construction we make even minor mistakes, then if it turns out that something is wrong with the house, we may lose the warranty on it, because manufacturers usually provide guarantees for such houses, but only when its team builds .

In total, therefore, the cost of adapting a sea container can be even 60% lower.

How to convert a container?

Now let’s move on to the stage where we modify our container. The conversion of a sea container for housing purposes, to the state of a gazebo or to the state where we have our own office in the container, can be divided into two main stages.

The first stage is shorter and less laborious, but no less important than the next stage. The first stage is the foundation of the container. We have to do it on prepared ground. The prepared area is primarily the construction of, let’s call it, a small foundation on which our container will stand. This is to provide us with two things. The first thing is insulation from the ground, thanks to which the container will not corrode and moisture will not get into it, and the second thing is to level the container. We can make such a foundation very simply.

It is enough to dig a dozen or so holes in the ground to a depth of about 30-40 cm and place two or three foundation blocks in them, previously lining the excavations with several layers of construction foil. Two things are important in all this. The first is that one such foundation should be at least 2 meters in circumference of the container, while the second important thing is that these foundations must be well leveled so that the container is simply also level.

We are finishing the container

Of course, finishing the container must be preceded by some form of design, because we should not do such things on a regular basis. It is worth mentioning that this stage can be omitted if we buy a construction container, however, the price is higher than for a sea container. First of all, we will have to deal with the actual insulation. Insulation can be made very easily, there are actually 3 materials used, i.e. wood, polyurethane foam and mineral wool.

First of all, we need to make ribs for the floor, walls and roof from square timber with a height of about 120 mm. In such ribbing, we first apply a layer of polyurethane foam, which must be evenly distributed to a thickness of about 3-4 cm.

This is to prevent moisture condensation. If we put only mineral wool there, there is a risk that moisture could accumulate there.

Then, on such ribs, we put gypsum boards on the walls and ceiling, while the floor can be put with boards, OSB boards or really whatever we want and is suitable for the floor. The next stage is actually cutting out the windows and doors and inserting them, and in fact, if we want to have a gazebo, it could be finished in general.

Of course, we can make a single or gable roof, but insulation is really the basic thing that we always have to do if we want to adapt a container at a relatively low cost. There are people who, for example, make electrical connections, you can build a toilet, shower, kitchen, etc. All this is really not difficult when you already have a container insulated and protected against moisture and weather conditions.

First of all, such a container can be improved while staying inside, in relatively comfortable conditions. We can finish and add new elements on an ongoing basis and it is neither too much of a problem nor does it generate particularly large amounts of money.